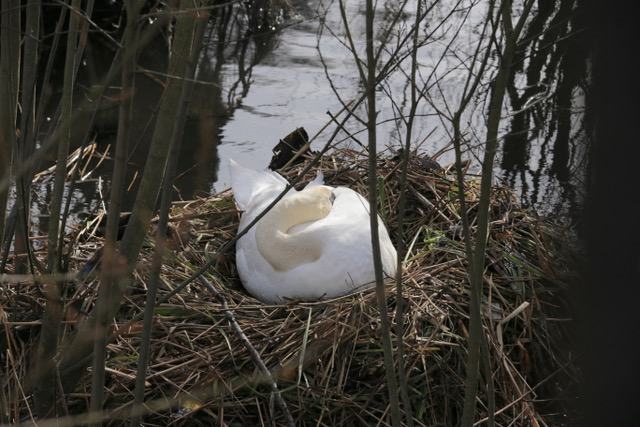 Our resident nesting pair, Brighid and Siegfried, have built their nest in the same spot as last year. This is their 6th year of nesting at Craiglockhart Pond. Eggs have been spotted on the nest from the 24th March.

For the next seven to eight weeks, Brighid will rarely leave the nest apart from occasionally to feed or wash herself, while Siegfried takes over. Brighid will have been feeding a lot recently in preparation for the demanding incubation period. We expect hatching to take place in early to mid May.

As of March, only one cygnet remains at Craiglockhart Pond, and Brighid and Siegfried have been putting pressure on the young bird to leave. The other cygnets have already left for greener pastures (or bluer waters). As we were not able to ring the cygnets in 2020 we do not know where they have gone, but many of our previous cygnets found their way to St Margaret’s Loch at Holyrood Park, and we have also had cygnets move on to coloniesin the River Almond, Musselburgh, and Fife.

Please be considerate of our nesting pair. Keep dogs well away from the nest. Please don’t throw food near the nest, as this can attract rats and other predators.