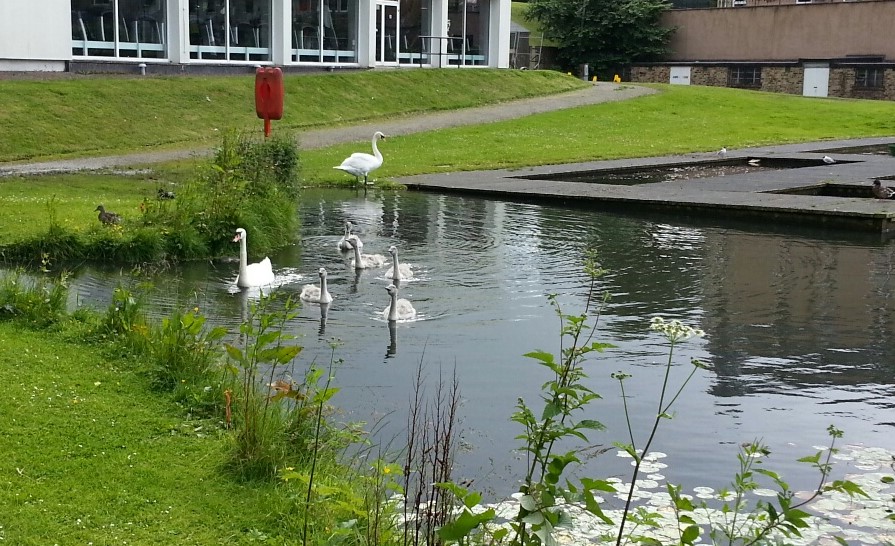 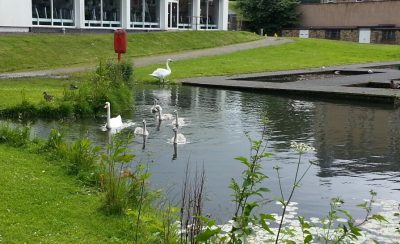 In fact, there are seven swans on the pond – Siegfried (the cob), Brighid (the pen) and five cygnets. Sadly we lost one of the cygnets at the end of May – probably to a gull attack. The cygnets are now scruffy adolescents but still charming. They have lost their fluffy down and are growing proper feathers. They will be ringed, weighed and health checked in August.

Our swans continue to protect their territory against all invaders. They have chased away other swans and, with help from the gulls and crows, seen off buzzards, cormorants, herons and Canada geese.

We also have ducklings and baby coots (cootlings?) on the pond but no little grebe chicks so far this year. Look out for sedge warblers around the pond and tree creepers in the surrounding woods. We await the first sightings of nuthatches and jays which have been seen in nearby woods.

Behind the pond, volunteer squads have cleared large areas of greater willow-herb from the marsh to promote plant and wildlife diversity. Some marsh orchids can now be seen. In October, we will dig out some small ponds to create new habitats for frogs, toads and newts.

The pond and the marsh are rich environments and constantly changing. We are lucky to have them on our doorsteps.