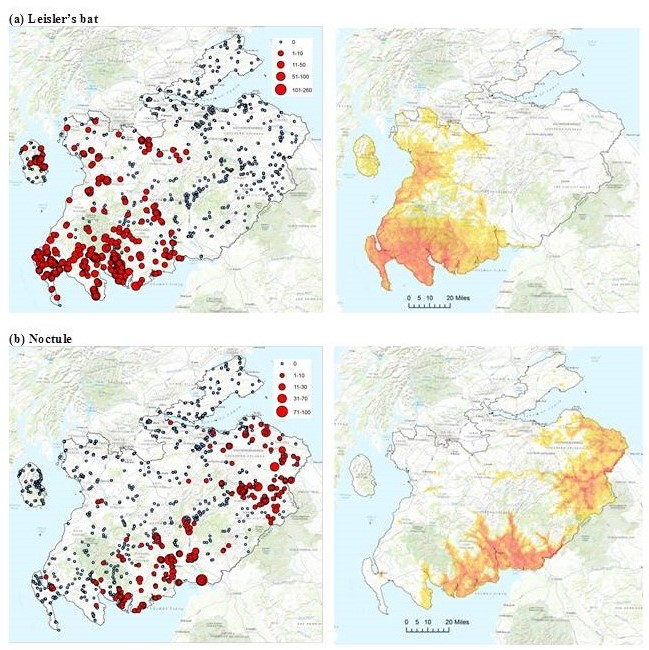 During the early summer we took part in the Southern Scotland Bat Survey. This involved going out on three separate evenings to set up the monitoring equipment then returning at dawn the next day to retrieve the kit. The equipment was fairly easy use and consisted of a audio recorded designed to pick up only the high frequency signals given off by the bats plus a microphone that was set up on a very long pole. Different types of bats make noises of a different pitch and frequency so it is possible for experts to identify the individual breed/breeds that are present in the area. The number of individual recording also give an indication of numbers. We are not sure how our findings translate into actual numbers of individual bats but from the raw data that I saw we made around 1,000 recordings per night

We don’t have specific data back for our these specific areas but the British Trust for Ornithology put the following information in the form of an e-newsletter to all those who had particpated in the  Southern Scotland Bat Survey.

Thanks to your help, 715 different 1-km squares were surveyed for bats in 2016. This comprised 1,537 complete nights of recording and 1,422 different recording locations. This has resulted in the collection and analyses of 399,242 bat recordings. 275 volunteers took part in the project, and either borrowed a single detector from a hosting centre, or multiple detectors from the BTO for an extended period to survey 375 1-km squares, with two BTO fieldworkers surveying a further 339 1-km squares.

Improving our understanding of bats

The project has improved out understanding of patterns of distribution and activity of all species from the near ubiquitous Soprano pipistrelle to the locally scarce Nathusius’ Pipistrelle. The maps below show where each species was recorded in 2016 (maps on left), and how we have combined these data, and information on habitat, elevation and weather, to predict species distributions across the survey area (maps on right).

Fig. 2. Maps of bat activity (number of recordings / night) as a proxy for abundance (left) and predicted distribution (right).

To process and provide rapid feedback to participants during the field season, it has been necessary for us to develop an approach to semi-automate the analyses, to assign recordings to species, before further validation at the end of the season. The steps involved are described in more details on www.batsurvey.org/species-identification. Following validation, Common and Soprano Pipistrelle made up 93% of the total bat recordings. The figure below shows how the remaining 7% of bat recordings break down by species.

Continuation of the project

We are currently working on writing up the results of this last survey season, the final report of which is due in May 2017. We have not secured funding to continue the project in 2017, but we have the joint ambition with the Bat Conservation Trust to try and continue and develop the project as a monitoring scheme, under the umbrella of the National Bat Monitoring Programme. If this happens, we would be looking to encourage as many people who have taken part this year to resurvey the same locations again. By making repeat visits, ideally at about the same time of year, we would have the potential in the future to monitor and quantify changes in bat populations.

We are so grateful to everyone who took the time to get involved in 2016. We hope that you had fun and will be joining us again if we are able to continue the project in 2017.

Copyright © 2016 British Trust for Ornithology, All rights reserved.
You are receiving this email because you participated in the Southern Scotland Bat Survey